Edward Luce’s new book addresses the crisis in Western liberalism — but focuses on symptoms rather than the underlying condition.

Self-styled liberals in the last US presidential elections voted for a candidate who dismissed vast swathes of the electorate as “The Deplorables”. The Deplorables, naturally, voted for Donald Trump.

By my lights, Clinton is no liberal. No one who stresses groups over individuals and their rights is. But the term ‘liberal’ got hijacked by the statists, who have used the label to promote the interventionist fashion of the moment, from climate change to health insurance. In so doing, the Democrats ensured the term lost its valency. Thus, we have Mark Lilla, a Columbia professor quoted here, calling for an end to ‘identity liberalism’ – an oxymoron if ever there was one. The American left, he wrote, “slipped into a kind of moral panic about racial, gender and sexual identity that has distorted liberalism’s message.”

The net result – the richest cities in the US voted for whatever confused left-liberal platform Hillary represented, while the working classes voted for Trump’s conservative, hate-filled agenda. 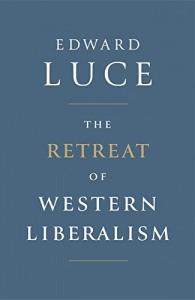 Edward Luce, in his book The Retreat of Western Liberalism, dates the shift of political markers to the 1960s, when “the Western left abandoned the politics of solidarity to embrace one of personal liberation.” During the US anti-war protests, the labour unions became uncomfortable being on the same side of the police barriers as the Harvard-Berkeley hippie types, and gradually moved over to the Conservatives.

In Britain, when the skilled working classes voted conservative in 1979, they helped vote Thatcher in. Now, voting to keep Europe out, the intent of the British working class makes for an ironic contrast with the words of the Internationale, the 1890s working-class anthem which predicted that the working class would “group together and tomorrow The Internationale will be the human race.”

A huge shift in global economics further stoked this political change. Over the last three decades or so, emerging Asian nations, especially China, Vietnam and India, joined the global supply chain. The efficiencies of global production created value at many levels – for consumers, whose buying power multiplied; for the managers and share-holders of companies sitting atop these supply chains; and above all, for the middle classes of Asia, who saw incomes rise by 80% in this period. But in the West, the working class saw, on average, a scant 1% improvement in incomes.

Meanwhile, Clinton and her ilk became part of the global elite, more comfortable in board-rooms and banquet halls than in factories or working-class neighbourhoods. Whether pseudo-left, or who knows what kind of right – the political class had more in common with each other than with their own working classes. Their shared language became what Luce calls ‘McKinsey speak’, the lingua franca of Davos.

In tracing four decades of increasing class alienation, Luce argues that “Trump and his ilk did not cause the crisis of democratic liberalism. They are a symptom.”

Sound medical practice addresses symptoms, but focuses on curing the underlying condition. Luce obsesses about the symptom, and far too much of the book is devoted to excoriating Trump – 269 mentions, according to my Kindle. This includes several pages painting a scenario where Trump brings the US to the brink of war with China, and only Putin’s intervention saves the world from annihilation. The dread is complete – thanks to Trump, Putin is elevated to global statesman.

Quite apart from this fictional scenario, the author believes that Putin’s “goal is European disunity. It is an aim he shares with Trump.” With Europe thus shattered and the ignorant Trump facing the wily Chinese, the end is nigh. A permanent state of global war – cyber- rather than weapon-based – will likely prevail. The center will not hold because Trump has lost US its moral legitimacy to play global cop, and the only other possible candidate, China, has no desire to volunteer for the job.

Before Trump, Luce believes, US democracy was linked to its foreign policy. Despite American support of despotic regimes across the world, the link was preserved. A few months of Trump, he avers, and this link is permanently shattered. I would rather call it the lifting of an illusion, which only the naïve still bought into.

Rather than dwelling on geopolitical gloom, I would much rather have had Luce explore the forces that could bring a less divisive President into the White House. On the economic front particularly, is there an inevitability in increasing US inequality, or will the shock of Asian labour supply ease? Will the Democrats – and their counterparts in the UK and Europe – be able to find a less alienating narrative? Will some sense of national solidarity, or just common decency, reassert itself.

Written to a tight time-table, prompted by the results of the US elections, the book is too consumed by shock and the hatred of Trump to find a balanced way to explore the future. This is a pity, because Luce’s understanding of the political and economic forces of the last half-century would make him a good guide into scenarios other than this apocalyptic one.