The 2020 Commission Report by Jeffrey Lewis is a compelling novel rooted in real-world challenges and fears.

The Cold War not only gave rise to thousands of nuclear weapons, but also movies like Dr. Strangelove and Fail Safe as well as television dramas such as The Day After and Threads. These brought out the dangers of nuclear weapons to the eyes of the public, and also steered policy.

However, that was the Cold War, during which the United States and Soviet Union amassed thousands of nukes pointed at each other. The 21st century presents a different landscape. Nuclear war is more plausible than ever with the changing geopolitical landscape, non-traditional security challenges, and risks of cyberattack, insurgency and the spread of misinformation, 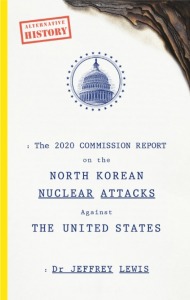 Against this backdrop, The 2020 Commission Report on the North Korean Attacks on The United States, a “speculative novel” by Dr Jeffrey Lewis is timely and relevant. Lewis, a nuclear-weapons expert, delves into the heart of a war between the US and North Korea, starting with the breakdown of negotiations, and exploring the dangers of such an event.

It all begins on 21 March 2020, with North Korea confused a South Korean airliner which diverted off-course with an American bomber. It shot the flight down, killing all 228 passengers, mostly children, on board.

Meanwhile, American President Donald Trump resting at his Mar-a-Lago golf club was not informed about the incident. he finds out about the shooting of the South Korean airliner on TV. The result? A tweet that reads “LITTLE ROCKET MAN WON’T BE BOTHERING US MUCH LONGER!” At the same President Moon Jae-in orders limited military strikes on high-value targets across the border, including the headquarters of North Korea’s air force and suspected residence of Kim Jong-un.

Correlating these events, Kim Jong-un, tucked away in a remote bunker, is absolutely  convinced of an attempted assassination and immediately orders a nuclear attack.

What comes next is dark and  horrifying. The North Koreans start retaliatory strikes, leaving the reader feeling grim and hopeless. Many missiles fail, a few miss their targets, and the rest reek havoc after reaching their targets spread across South Korea, Japan and the United States as the ballistic missile defence (BMD) system fail to intercept the incoming missiles.

With each step, Lewis breaks down the essence of poor decision-making, which ultimately led to the unforgettable disaster. A trail of offensive tweets against Kim and his sister, Kim’s paranoid overreaction to South Korean attacks, miscommunication within the Trump administration and the misjudgement of North Korea’s nuclear capabilities, all play their part in the ensuing disaster.

The testimonies of the survivors recorded in the novel are directly taken from the survivors of Hiroshima and Nagasaki. “I made the decision to use their real testimonies to describe the horror of the fictional nuclear war in these pages,” says the author.

The novel has its share of dark humor woven into the narrative of bad decisions. However, the story is not far fetched. Lewis has supported his work using unclassified war-fighting doctrines and declared postures. The novel remains relevant as the prospect of talks between North Korea and the US breaking down remain high. While experts have already expressed their scepticism about North Korea’s commitments to denuclearise, the Trump administration is confident that the North Koreans will make concrete commitments to dismantle their arsenal. Yet, new evidence suggesting that North Korea is working on a new missile (suspected to be the Hwasong-15) raises concerns about how Trump will react to these revelations.

In the the novel’s conclusion, Lewis makes a subtle yet provocative call for action. What is the role of nuclear weapons in the 21st century? Should they be abolished altogether? Even if nuclear weapons deter, is it worth posturing weapons at brinkmanship? These questions do not have straightforward answers. Given the ever-present dangers of nuclear war, including accidental war and inadvertent escalation, these questions require serious thinking.

The 2020 Commission Report is a compelling novel and much-needed for the second nuclear age in which we live. It is highly recommended for people within and outside public policy.